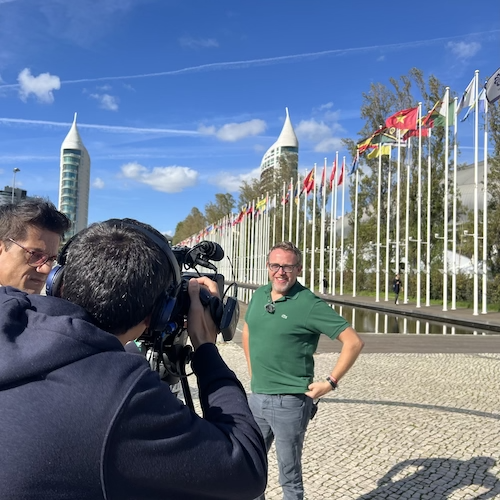 How to build in a crypto bear market: Nick Jones, CEO at Zumo, talks to Bloomberg Fintech Correspondent at Web Summit in Lisbon.

Zumo CEO and Co-Founder Nick Jones has seen it all: the good times, the bad times, and everything in between. Under his stewardship, Zumo has enhanced its consumer offering, expanded into B2B, and is emerging from the year-long market downturn in better shape than ever.

Earlier this month, Nick appeared at the Web Summit tech conference in Lisbon where he spoke about Gen Z and the future of investing. He also took time out to give the following interview on the health of the crypto industry at large.

In a frank discussion, Nick runs through the challenges of building in a bear market, how Zumo has navigated to avoid the pitfalls encountered by other crypto companies, and why the industry is in better shape than ever.

On the evolution of Zumo…

It’s been a challenging year, but we’ve used that opportunity to refine and build out our B2B business. We’ve shifted the focus away slightly from our direct to consumer business, and have certainly spent less on user acquisition than we had planned at the start of the year. And that’s just because in a bear market, when spending lots of money on users who are maybe not interacting in the same way as they were with exchanging crypto in a more bullish market doesn’t make sense. So we’ve used the market conditions as a positive and an opportunity to focus on B2B.

Zumo is a crypto business. We’re a blockchain financial infrastructure provider with our own consumer app, we’re crypto asset registered with the FCA in the UK, and provide an embedded crypto-as-a-service solution for other fintechs and banks. We’ve been checking the appetite for such a product every year since we were founded in 2018, seeing if the market is ready for that type of embedded fintech solution. We started to get some significant interest in this area towards the end of last year and we’ve taken that as an opportunity to build out on that path.

Traditional Finance (TradFi) businesses are definitely interested in crypto but they view it through a risk lens of course. But we know they’re interested because we have interactions with all sorts of traditional asset managers, retail banks and investment banks who have a massive amount of interest in the space, because they’re looking at their future customers. Gen Z and people of that generation are not looking at TradFi as the answer to retirement planning and future financial wellness planning: they’re looking at alternatives. So these types of financial providers know that they need to play in the crypto space.

They also broadly, I believe, see the benefits of tokenisation and the power of blockchain. Whether it’s HSBC with FX Everywhere, which is a blockchain powered platform; or JP Morgan using blockchain to move money around the world. Crypto is an asset class being invested in massively by institutional players. One of the interesting things about this current market cycle, compared to the 2017 bear market, is that back then, when traditional finance was beginning to nibble on crypto, in that crypto winter they all ran for the hills.

In this crypto winter, that world has doubled down on the space, whether that’s creating new funds, derivatives products, or investing. Aberdeen Asset Management is making a massive investment in this area. Institutions are either investing in the underlying assets or investing in the protocols. They’re investing in exchanges and other platforms or they’re creating products around it. So there’s a huge amount of interest. But it’s about writing down risk from the point of view of these traditional players. So how do you work with partners who are less rather than more risk-on in the space?

One of the reasons why Zumo has weathered the current market downturn, when others have struggled, is that we’re probably quite boring as far as crypto organisations go. We’ve always put risk at the forefront of our agenda, for our customers, for ourselves and for our investors. So the fact that we’ve restricted ourselves to working with the Bitcoin and Ethereum blockchains, the two largest, best capitalised and most secure assets means we haven’t had exposure to any of the more racy crypto projects. Last year it became clear that a number of those very big projects had no real governance around them and were definitely going to go wrong.

The fact that we’re not tied to any of those big projects has helped us weather the crypto winter, which has been very much tied to the macro environment. Everything’s down: crypto’s down. And crypto is much more tied to the S&P than it used to be. Bitcoin pretty much tracks it. But if you look at where the big shocks in the market were, it was those very large projects leveraging and building on top of DeFi that failed, which were always going to fail, and which pulled a lot of things down around them along with investor confidence. So by not being involved in them and taking a risk-based approach to what is a very new and high risk space has left us in good stead over the last year or so.

We’ve focused on building, which I know is a real cliche, but good companies build in economic downturns. They try and improve their existing product, they try and listen to customers and listen to the market. Crypto has historically been good at making money when the market is up. But what are the business models for crypto businesses when not a bull market? So these are the kinds of things that good companies in our space should be working on.

What other really strong use cases can be developed? How would you make a product that is ready for genuine mass adoption, something we haven’t really seen yet? Crypto is still a tiny fraction of the traditional finance market. So yes, we’ve made lots of micro optimisations to our products and improved the underlying infrastructure and all this heavyweight backend IT stuff, but we’ve also worked on how we present that to the market.

On sparking the next retail rush…

We have a strong belief that the next big wave of crypto adoption will be delivered by household name companies who would like to add crypto to their existing product. And that greater consumer trust will be there for most people more in companies that they’re used to working with. Those companies don’t want long development lifecycles and to spend four years building their own crypto products and getting their own regulatory approach.

So that’s why we’ve invested in providing an “as-a-service” solution for those types of companies. While I’m not at liberty to disclose names at this point in time, we’re midway through that journey with a couple of larger organisations that are conducting pilots. These are larger fintechs who are more agile than traditional companies and thus able to take a higher risk approach to new products, but they still need to ensure their own regulatory approval and that they maintain their own financial licences.

It’s extremely hard getting regulated and licenced – as it should be – in a market like the UK and in Europe, so there’s always this interplay between wanting to innovate and risk.

On crypto vs the world…

Crypto valuations were overinflated at the top of the hype cycle, as they were across ecommerce and a number of other areas. And the businesses that are probably having the hardest conversations right now are the ones who’ve raised lots of money at the top of that hype cycle. We’ve seen a number of very well publicised cases where companies are having to do down rounds or significantly shrink teams and growth ambitions geographically.

The issue from a macro point of view is that there’s peak uncertainty at the moment, probably more than there’s been since the peak of the Cold War. China; Taiwan; obviously the Ukraine situation: all these awful situations on top of the debt crisis and rising cost of living. So there’s tons of stuff causing uncertainty that will increase investor inertia. But the money’s still there and hasn’t gone away. It’s just things that used to take six months now take 12 months, and things that took 12 months are now taking two years.

We’re fortunate because we’re in a good space, right? Broadly, if you look at web3, there is an acceptance that this movement is happening, certainly more so than when we were at the very start of our journey. Blockchain is being adopted and the Internet of Value is better understood by investors. So we’re in a nice position. I think it’s probably not too dissimilar to the post dot-com crisis in 99/2000.

There’s definitely been a bit of a shakeout for businesses that aren’t future-proofed, as happened in 2007-2008. But from an economic perspective, you have to recognise that things are cyclical, and thus to be on the right side of history, you have to base your business around something that’s going to grow. We’re seeing greater public awareness in the space, more and more people becoming engaged on a global basis, which puts Zumo in a very strong position.

As for why Zumo is on course to not only survive as a business but ultimately thrive, there are three primary things in our favour. Firstly, there’s only 34 businesses in the UK that have made it through the FCA’s crypto assets registration regime. And we’re part of that conversation so that’s definitely a badge of honour. Then in terms of our core technology, we have a secure platform and haven’t been involved in any of these blow-ups that have affected other companies. So in terms of reputation, we’re in a decent place.

The third pillar that makes Zumo resilient is our ESG efforts.  We’ve put in a lot of work there, particularly around Bitcoin, electricity use and how institutions can look at decarbonising Bitcoin and other digital assets that they own. So those three pillars and the fact that we have been able to take a consumer app to market and show that you can combine CeFi, DeFi, and a bank account in one space. 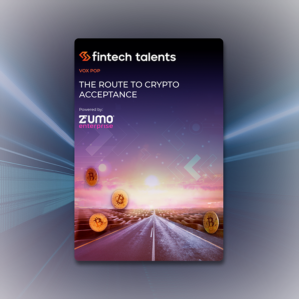